New book about experience of life and street prostitution in Hull

When I began researching child sexual exploitation it wasn't called that. In fact it wasn't called anything at all. The young people involved were generally thought of as young prostitutes or rent boys - at best they were seen as being 'in moral danger' and at worst as out of control, promiscuous, tarts. I knew from previous research with adult survivors of organised abuse that buying and selling the rape of children and teenagers happened in the UK and was happy when organisations like Barnardo's began insisting that what was happening was a form of child abuse - involving perpetrators and victims not prostitutes and punters.

However, one consequence of this renaming and reframing has been to entirely separate discussion of CSE from that of adult prostitution in policy and practice. Amongst CSE campaigners there has been a belief that distancing CSE from debates about adult prostitution was necessary in order to engage public and professional sympathy. At the same time CSE services have often kept their distance from those for sex workers because they were fearful of young people being influenced or harmed by the association.

The result has been that grown up women selling sex now appear to belong to a different moral universe to teenage girls being 'groomed', tricked and trafficked. Except they don't and can't - because so many women working in prostitution are actually those same girls grown up.

I've been helping to edit a book produced by 12 women who have all worked in street prostitution in Hull. They called it 'An Untold Story' the story of how, in their lives, prostitution followed on from neglect, abuse and exploitation and led to addiction, homelessness, prison, the loss of children to care and friends to early deaths. In one sense it is a cautionary tale of what can happen to exploited young people if we don't provide the help they need at the right time. But it is also a story of hope, survival, creativity and the determination of women to overcome extreme disadvantage with very little outside help.

The women wrote the book because they believed that if professionals understood the truth of their lives they could create services that would respond more appropriately to other girls and women: make it so, read it.

There are a number of free copies of the book funded by LankellyChase Foundation. To obtain a copy just send a stamped addressed A4 jiffy envelope with £3 postage on it to Hull Lighthouse, 310 Newland Ave, Hull, HU5 2NB. 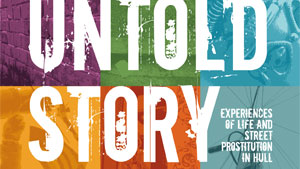